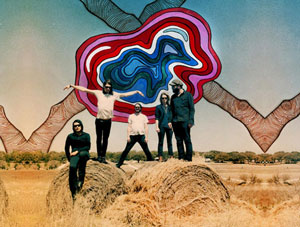 The sultry neo-psychedelic sound of the Black Angels came together in spring 2004, taking their name from a Velvet Underground classic, “The Black Angel’s Death Song.” Hailing from Austin, Texas, the band is comprised of Alex Maas, Christian Bland, Kyle Hunt, Stephanie Bailey and Jake Garcia.

The band’s self-titled debut EP was released in late 2005, finding an international audience through Myspace and music forums, and quickly becoming an underground sensation. The band released their first LP, 2006’s Passover on Light In The Attic, to great acclaim and began to tour the world.

Passover was followed by Direction To See A Ghost in 2008, a year which also marked the first Austin Psych Fest (now Levitation), the annual psychedelic rock- focused festival founded by Maas, Bland and friends. In late 2008, The Black Angels performed as the backing band for former 13th Floor Elevators frontman Roky Erickson on a series of dates across the West Coast of the U.S. Next, in 2010, they recorded a couple of collaborative tracks with Unkle.

Their third album, September 2010’s Phosphene Dream hit the Top 50 of the Billboard chart, and was followed by its companion piece, the Phosgene Nightmare EP, in 2011.

Released in 2013, Indigo Meadow was produced and mixed by Grammy-nominated fellow Texan John Congleton, and that release was soon followed by its own companion EP, April 2014’s Clear Lake Forest.